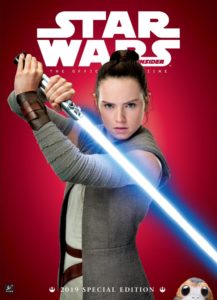 Welcome to this special edition of Star Wars Insider, now on its 10th volume! This time we’ve focused on some of the great women who have contributed to the Star Wars saga, in front of the camera and behind the scenes, and as creators of books, comics, and fine art.

We are also paying tribute to some of the best female characters that have captured the imaginations of fans across the world; characters such as Leia Organa, Sabine Wren, Ahsoka Tano, and Rey.

From an interview with Lucasfilm’s president, Kathleen Kennedy, who has spearheaded the franchise to even greater heights; to a look behind the scenes of Marvel’s Doctor Aphra series; to writer Tricia Barr’s heartfelt tribute to the much-missed Carrie Fisher, this volume is a celebration of a glorious legacy that only continues to get better with each passing year…

May the Force Be With You… Always