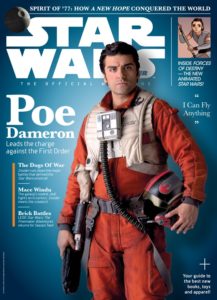 In this issue we’re featuring Forces of Destiny—an ambitious new series that promises to explore pivotal moments in the lives of characters including Rey, Jyn, Leia, and more. It’s a really exciting project made even more enticing by the fact that the likes of Daisy Ridley, Lupita Nyong’o, John Boyega, and Felicity Jones are voicing their big-screen characters in the series.