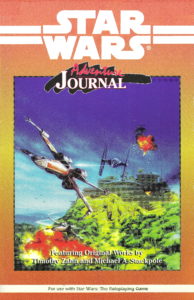 New York Times-best-selling author Timothy Zahn weaves a tale on the origins of one of his most infamous Star Wars characters! When a Victory-class Star Destroyer captain pursues Rebel smugglers into Unknown Space, he and his ground troops get more than they bargained for. Are the attacks on their encampment caused by the smugglers, primitive alien natives, or someone else hiding in the forest? Find out in Mist Encounter.
And don’t miss the special preview story featuring characters from Rogue Squadron, the first in Michael A. Stackpole’s series of four X-Wing novels to be released in 1996! Missed Chance follows X-wing pilot Corran Horn – on the run from Imperial agents – and the cunning schemes of an insignificant but power-hungry Imperial bureaucrat. Find out more about the upcoming X-wing novels in an exclusive interview with the author.