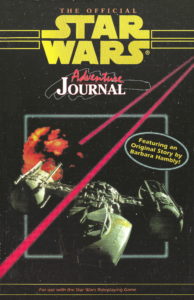 „There were places in the galaxy more depressing than the planet Gamorr in slushtime. Callista Ming had even been to some of them.“ New York Times bestselling Star Wars author Barbara Hambly continues the adventures of Callista Ming, the former Jedi Knight from Children of the Jedi and Planet of Twilight. Callista and free-traders she’s with land on Gamorr, homeworld to the porcine Gamorreans. One of the crew has returned to challenge a powerful warlord for the hand of his wife, an influential matron and head of a clanhold. When the warlord is found dead, Callista and her friends are accused of murder! Fully aware that they’re innocent, Callista embarks on an investigation involving the clan matron, her jealous daughter, a haunted chamber and a deadly alien creature. Find out if Callista solves the „Murder in Slushtime.“

Don’t miss these other exciting features: