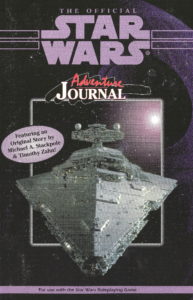 Join New York Times bestselling authors Michael A. Stackpole and Timothy Zahn as they conclude their tale of deception, intrigue and betrayal on Corellia. Corran Horn and his father, Hal, have been imprisoned in Zekka Thyne’s dungeons, no thanks to the traitorous bounty hunter, Jodo Kast – who is often mistaken for the infamous Boba Fett. The two CorSec agents were trying to discover what Kast and a rag-tag group of smugglers were going to do with the lowgrade spice and rare Durindfire gems they smuggled onto the planet. At first it seemed like some crooked deal with the small-time crime chief Borbor Crisk – but the two CorSec agents are afraid something more devious is going on. It’s all part of a grand scheme masterminded by one of the galaxy’s most cunning tactical minds. Find out how the entire puzzle fits together in „Side Trip.“

Also in this issue: