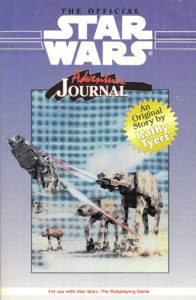 His body broken but his determination still whole, Daye Azur-Jamin struggles to serve the Rebellion, running guns to aliens fighting hard against Imperial domination that treatens their very existance. He doesn’t suspect that his fiance, Tinian I’att, and her newfound mentor, the Wookiee bounty hunter Chenlambec, have targeted the aliens‘ charismatic leader, Agapos, as their next prey! Inspired by Agapos‘ truthful sayings, Daye must save the alien leader, Tinian and himself. Only Droids Serve the Maker is another Star Wars adventure from New York Times bestselling author Kathy Tyers.