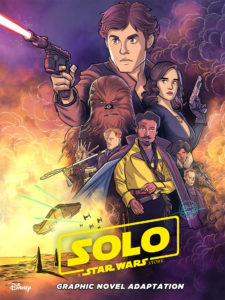 The official all-ages adaptation of SOLO: A Star Wars Story!

There aren’t many ways someone like Han, a young scrumrat raised in the streets of Corellia, can leave his planet and become a great pilot, and none of them are easy. But when Han finally makes it, it sets up a life-changing journey that will turn him, and his future co-pilot Chewbacca, into the most famous smugglers in the galaxy.

Capturing the galaxy-spanning action of Solo, experience the movie as a beautiful graphic novel combining the epic wonder of Star Wars with streamlined, young-reader friendly designs. This all-ages graphic novel is a must-read for longtime fans and a great introduction for young newcomers!