Dark Forces: Soldier for the Empire 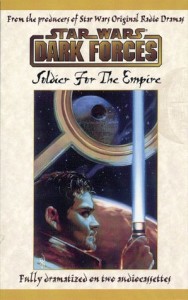 The Star Wars saga continues with William Dietz’s Dark Forces: Soldier for the Empire. The brilliantly told story brings to light the events that ripped apart the life of young Kyle Katarn, turning him into a man without friends or family—a man devoted only to vengeance. The Rebel Alliance employs Katarn, a freelance fighter, to fight their cause in numerous perilous situations. But Katarn is interested in fighting the Empire for his own reasons and has no allegiance to the Rebel cause. He doesn’t mind fighting the fight of the Rebel Alliance, because it enables him to fight against the powerful Empire, for which he harbors a bitter hatred that is rooted deep inside him. Katarn’s haunting past reveals that he was once in training to become an Imperial soldier, dedicated to the service of the Emperor.