Lost Tribe of the Sith 2: Skyborn 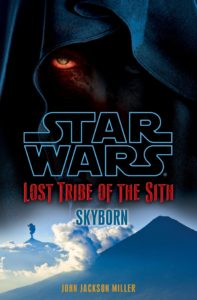 Don’t miss Star Wars: Lost Tribe of The Sith: Skyborn, a FREE original eBook short story, the second in a series that tell the untold story of the Fate of the Jedi’s forgotten Sith castaways, their battle to survive, and their quest to re-conquer the galaxy!

A Jedi ambush leaves the Sith ship Omen marooned on a remote alien world, its survivors at the mercy of their desolate surroundings and facing almost certain death. But Sith will no more bow before the whims of fate than they will yield to the weapons of their enemies. And Omen’s cunning commander Yaru Korsin, will let nothing keep him and his crew from returning to the stars and rejoining the Sith order’s conquest of the galaxy. Murdering his own brother has proven Korsin’s ruthless resolve-but now an entire race stands in his way.

The primitive, superstitious Keshiri worship unseen gods called the Skyborn, shun science, and punish unbelievers with death. Branded a heretic the widowed young geologist Adari Vaal is running for her life. Among the mysterious Sith castaways she finds powerful sanctuary-and her saviors find the means of survival. With Adari as their willing pawn, the Skyborn as their Trojan horse, and the awesome power of the dark side of the Force at their command, the lost tribe of the Omen set out to subjugate a planet and its people-and lay the foundation for a merciless new Sith nation.

BONUS: This edition contains an excerpt from Star Wars: Fate of the Jedi: Abyss.