Shadows of the Empire: Evolution 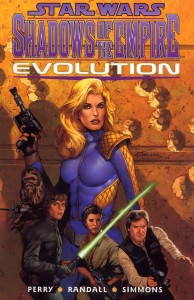 Xizor, the leader of the Black Sun criminal organization, has been destroyed, and Guri, a beautiful human-replica droid and Xizor’s personal assassin, is left wondering what her future will hold now that she no longer has anyone to answer to. Throughout the ongoing struggle for underworld supremacy, Guri endeavors to uncover hints of her human side-if it even exists. But in her quest to alter her programming and gain humanity, Guri becomes the quarry of both bounty hunters and Rebels (led by a Jedi-to-be named Luke). What secrets lie buried in her android mind that make her such valuable prey? Evolution is the sequel to the best-selling novel Star Wars: Shadows of the Empire and is the first foray into comics by best-selling Shadows novelist Steve Perry.