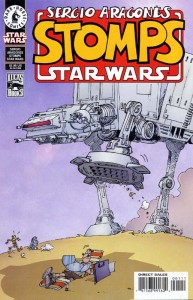 He’s done it to DC Comics . . . he’s done it to Marvel Comics . . . now Sergio Aragonés pays Lucasfilm the ultimate insult-he visits their home office! When the first Star Wars film came out over twenty years ago, fans all over the world wondered how the fantastic effects were achieved. By the time George Lucas got around to the long-awaited Episode I, the effects were much more sophisticated. In this special one-shot, Sergio gets an up-close and personal look at how the most-loved series of films ever have been made-so close that he winds up in the computers with Luke, Yoda, and Darth Maul! And you thought Mos Eisley had some unsavory characters before! Join Dark Horse for a look behind the scenes unlike any you’ve had before.