Last of the Jedi 7: Secret Weapon 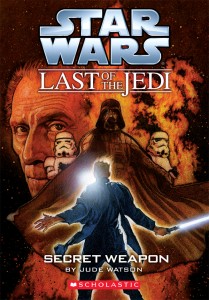 On the planet Belassa, parts of a secret new weapon are being built by the Empire. Darth Vader and Grand Moff Tarkin are present to make sure the secret stays a secret—and they are joined by none other than the former Jedi apprentice and Rebel leader Ferus Olin.

But is Ferus Olin really on their side? Or is he a double agent trying to save his planet and steal the Empire’s plans? Ferus must guard the secret of his own allegiance… or become yet another victim consumed by the dark side.