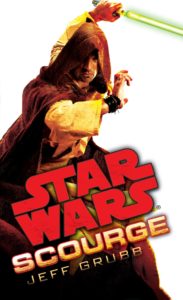 In the heart of crime-ridden Hutt Space, a Jedi Scholar searches for justice.

While trying to obtain the coordinates of a secretive, peril-packed, but potentially beneficial trade route, a novice Jedi is killed—and the motive for his murder remains shrouded in mystery. Now his former Master, Jedi archivist Mander Zuma, wants answers, even as he fights to erase doubts about his own abilities as a Jedi. What Mander gets is immersion into the perilous underworld of the Hutts as he struggles to stay one step ahead in a game of smugglers, killers, and crime lords bent on total control.