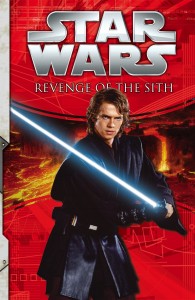 Experience the fall of the Jedi and the rise of the Sith with this manga-sized adaptation of Revenge of the Sith comprised of images from the film!

Anakin Skywalker becomes the dreaded Darth Vader in this final chapter of the Star Wars prequel trilogy. Desperate to calm his nightmarish visions of his lover Padmé Amidala’s death, Skywalker falls under the thrall of Supreme Chancellor Palpatine and his promises of power beyond all imagining. Once a slave to the dark side, Skywalker helps carry out a tragic conspiracy against the Jedi that will see the Republic transformed into an Empire.