Episode III: Revenge of the Sith #2 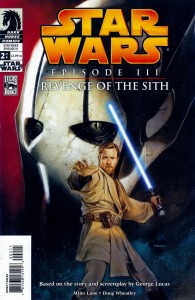 Based on the screenplay by George Lucas-the official comics adaptation of the most anticipated of the Star Wars films! The action of the Clone Wars comes to a dramatic conclusion, and events are put in place for A New Hope.

Shipping weekly, this four-issue series features art by Doug Wheatley (Star Wars: Empire volume 2-Darklighter)-who brings a level of life and detail to the adaptation that rivals that of the films themselves-with covers by Dave Dorman!