Tales of the Jedi: Redemption 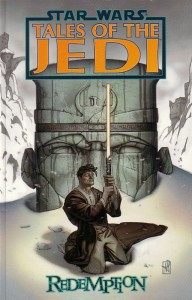 Ten years after the Sith War, the Dark Lord of the Sith’s chief lieutenant, Ulic Qel-Droma has been stripped of his Force powers and has isolated himself in a distant corner of the galaxy, trying to escape from a life he would rather forget. But his past is about to catch up with him as he is tracked down by Vima, the daughter of Nomi Sunrider, the woman who blinded Ulic to the Force. Vima seeks a teacher and Ulic sees in her a chance at redemption. Unfortunately, Vima’s disappearance draws attention, and the search party sent to look for her includes a vicious Jedi seeking revenge upon Ulic for killing her mate.