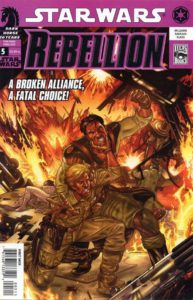 The reunion of Luke Skywalker and his boyhood friend Janek „Tank“ Sunber comes to its shocking conclusion, as one of these two men is forced to make a decision that will change both of their lives forever! With the entire Rebel fleet under siege by a massive Imperial force, Wedge Antilles and Red Squadron launch a valiant defense, but even they know if the fleet doesn’t figure out an escape plan soon, there won’t be anything left to defend. Meanwhile, chaos reigns on the Rebel command ship as a threat from inside continues to have devastating consequences for the Alliance. White-knuckled action in an era when Darth Vader was unstoppable and Luke Skywalker was little more than a brave farm boy – don’t miss it!