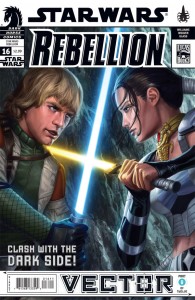 Darth Vader successfully lures Luke Skywalker and Princess Leia into a trap that could cripple the Rebel Alliance, as Vector – the most important Star Wars event of 2008 – concludes its third arc, setting the stage for the final galaxy-shaking showdown in Star Wars: Legacy!

On the dark surface of a desolate moon, Luke and Leia meet their first Jedi since Obi-Wan Kenobi, only to realize too late this Knight of the Old Republic is far different than their fallen friend–twisted by the Sith’s Muur Talisman and enraged by Darth Vader! Together, Luke and Leia must make a choice with far-reaching consequences, not just for themselves, but for the fate of the entire galaxy!