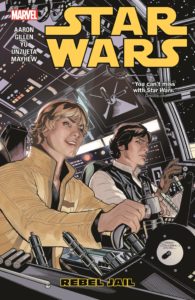 What comes next for the rebels after the events of VADER DOWN? Find out as the adventures of Luke Skywalker and friends continue! The rebel crew is en route to a prison base with a very important captive. But unlucky for them, they aren’t the only ones with their eyes on this prize! Plus: Meet a rebel spy at the heart of the Empire, and join him on a mission of life and death! And in another tale from the journals of Obi-Wan Kenobi, journey back to the Jedi’s days of exile on Tatooine. Moisture farmer Owen Lars may have taken in young Luke, but he refused to let Ben be part of the boy’s life. Now, prepare to discover the reason why!