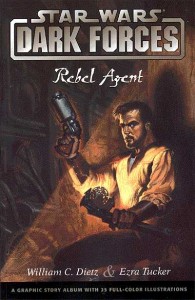 Following Dark Forces — Soldier for the Empire, Part Two of this lushly illustrated prose trilogy chronicles the adventures of Kyle Katarn as he learns of the mysterious Valley of the Jedi, discovered by his father years ago. Trapped in the Valley is an enormous reservoir of energy, waiting to be released. Who will reach the Valley — and its power — first, Kyle or the Dark Jedi known as Jerec? Written by William C. Dietz and accompanied by 25 painted illustrations by artist Ezra Tucker.