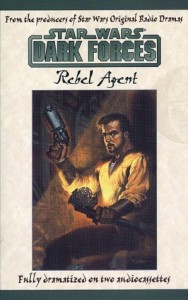 In Soldier for the Empire, Kyle Katarn, having graduated from the Imperial Military Academy, learns of his father’s murder. On his way home he meets a Rebel agent, learns the ugly truth about the way in which his father died, and swears revenge.

Now, in Rebel Agent, Kyle learns more about what his father found in the Valley of the Jedi that ultimately led to his death. Kyle finally earns his Knighthood as a Jedi, and the stage is set for him to avenge his father’s death and stop the Dark Jedi from taking control of the source of energy that lies underneath the valley.