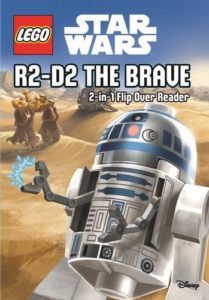 Join Han Solo, Chewbacca, Luke, Princess Leia, R2-D2, C-3PO, Darth Vader and the rest of the LEGO Star Wars gang in this 2-in-1 Flip Over Reader!

It features stories about two very different rebel heroes. In R2-D2 The Brave the feisty astromech droid is entrusted with one of the most important secret missions in the galaxy. Who but he can save his rebel friends from being cooked for dinner and can foil a bounty hunter’s plan to kidnap a rebel hero? In Han Solo’s Adventures you’ll find out what happened when Han was left behind when his friends chased Imperial biker scouts and what he did when his beloved starship disappeared!