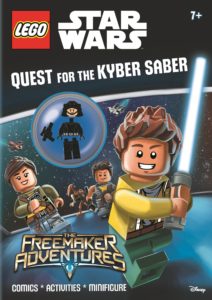 This LEGO Star Wars: Quest for the Kyber Saber activity book features The Freemaker Adventures, which is set between the events of The Empire Strikes Back and Return of the Jedi. This action comedy follows sibling scavengers Kordi, Rowan and Zander Freemaker, who along with their refurbished battle droid R0-GR, operate a salvage and repair shop in space. The series also features familiar characters and locations from the Star Wars saga.

In this action-packed Freemaker Adventure, perfect for 7 to 10 year olds, the Freemaker family is drawn into the battle between the Galactic Empire and the Rebel Alliance when Rowan finds part of the Kyber Saber, an ancient artifact with a powerful connection to the Force. This exciting activity book features puzzles, comics and a cool minifigure.