Dawn of the Jedi: Prisoner of Bogan #5 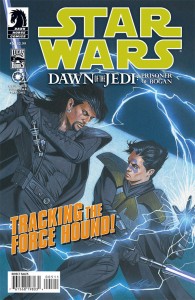 Je’daii Daegen Lok is on the verge of launching a war against the Je’daii. With the Force-strong stranger Xesh as his ally and a young Je’daii captive, Lok is close to his goal.

But Je’daii Rangers are close behind, as the Masters at the Temples have unlocked some of the secrets of Xesh’s origins. Something worse than the prisoner of Bogan is loose in the Tython system!