Dawn of the Jedi: Prisoner of Bogan #4 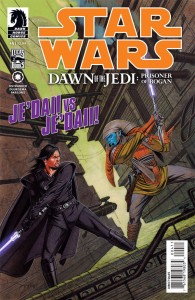 Even as the Je’daii close in on the mysterious Xesh and his mad ally Daegen Lok, a third party has entered the chase—a powerful woman from Xesh’s past.

Meanwhile, Lok has sought the help of old enemies to help him attain a common goal—the downfall of the Je’daii!