Dawn of the Jedi: Prisoner of Bogan #2 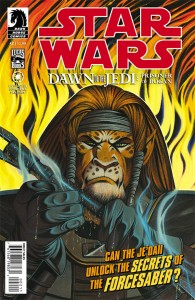 As the Je’daii study the amazing Forcesaber of the banished Xesh, word spreads that he and his fellow prisoner on Bogan, Daegen Lok, have escaped the dark moon! The three young Je’daii who first encountered Xesh are teamed with Je’daii Masters to locate the prisoners and return them to Bogan . . . and prevent them from bringing about the mad vision that Lok has obsessively held to during his years of banishment . . .