Dawn of the Jedi: Prisoner of Bogan #1 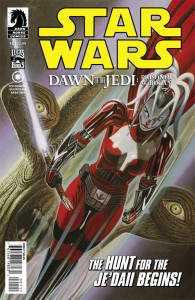 Banished to the dark moon Bogan, the Force Hound Xesh has been living in contemplation; the memory of who he was before his ship crashed on Tython still escapes him. A rival from his past is on his trail, and the Je’daii are doing all they can to discover his origin. And now, Xesh is about to meet someone who will change his life forever, a former great Je’daii . . . the prisoner of Bogan!