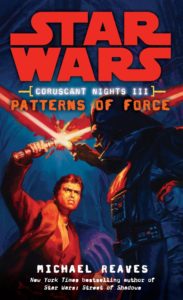 After the Empire’s bloody purge of the Jedi, one lone Knight still fights for those who cannot, unaware that he’s about to be swept into a cataclysmic battle against the Master of Darkness himself.

Throughout the galaxy, a captured Jedi is a dead Jedi, even in Coruscant’s most foul subterranean slums, where Jedi Knight Jax Pavan champions the causes of the oppressed with the help of hard-nosed reporter Den Dhur and the wisecracking droid I-5YQ. But Jax is also involved in another struggle–to unlock the secrets of his father’s death and his own past.

While Jax believes that I-5YQ holds some of those answers, he never imagines that the truth could be shocking enough to catapult him to the frontlines of a plot to kill Emperor Palpatine. Worse yet, Darth Vader’s relentless search for Jax is about to end . . . in triumph.

The future looming over the valiant Jedi and his staunch pals promises to be dark and brief, because there’s no secret whatsoever about the harshest truth of all: Few indeed are those who tangle with Darth Vader . . . and live to tell the tale.