Lost Tribe of the Sith 3: Paragon 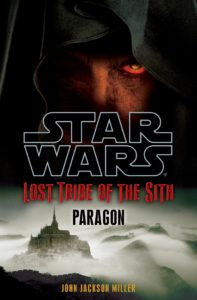 Don’t miss Star Wars: Lost Tribe of The Sith: Paragon a FREE original eBook short story, the third in a series that reveals the untold story of the Fate of the Jedi’s forgotten Sith castaways, their battle to survive, and their quest to re-conquer the galaxy!

The ruthless cunning of the Sith Order has served the shipwrecked crew of the Omen well on the alien planet Kesh. Subjugating the superstitious Keshiri race by posing as its fabled overlords has ensured the Sith’s survival-while they struggle in secret to return to the stars. But after fifteen years on their adopted world, some among the lost tribe have grown restless and fearful that assimilation will consume their Sith heritage. Now, as rival factions begin to appear, a shocking disaster throws into doubt the Sith’s future on Kesh.

In the distant city of Tetsubal, the entire native populace is suddenly wiped out by a grisly plague of unknown origin. With terrifying speed, more cities succumb to the mysterious contagion. Only the Sith remain unharmed-so far. And as Sith commander Yaru Korsin grapples with the looming loss of the paradise he rules and the race his people have come to depend upon, he must confront the dark possibility that the catastrophe may not be cruel fate but insidious sabotage.

BONUS: This edition contains an excerpt from Star Wars: Fate of the Jedi: Backlash.