Dark Times Volume 5: Out of the Wilderness 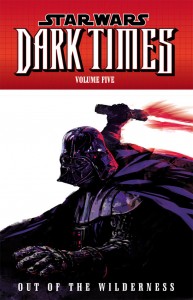 Everyone wants fugitive Jedi Dass Jennir. An assassin is hot on his heels, Darth Vader is also in the race to find him, and even the outlaw crew of the Uhumele are searching for their former companion. But for Jennir and his “partner” Ember Chankeli, those are distant concerns as they endure a scorching desert trek and an attack by deadly land pirates!

Even under a blazing sun, these are dark times! Collects Star Wars: Dark Times—Out of the Wilderness #1–#5.