Dark Times: Out of the Wilderness #5 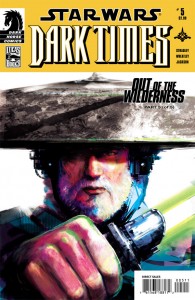 In a desert wasteland, it comes to a showdown. Using Jedi Dass Jennir’s friend Ember Chankeli as a pawn and his own tracking droid as a secret weapon, cold-blooded assassin Falco Sang believes he has the contest rigged. But what he hasn’t counted on is not one, but three willing sacrifices. How can you win against opponents who will risk everything?

And even if Sang wins, he still has one big problem: Darth Vader!