Dark Times: Out of the Wilderness #3 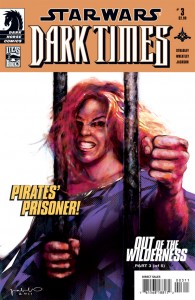 Caged fury! Desert raiders have captured Ember Chankeli, only to discover they have a tiger who can’t be tamed! Worse for them: they have a Jedi on their trail!

But Jedi Master Dass Jennir had better watch his back, because a mysterious assassin and Darth Vader both want his head!