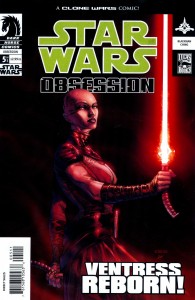 On the bleak cemetery world of Boz Pity, the Jedi fight what they hope will be a decisive battle against the Separatists. As a team of powerful Jedi take on Count Dooku, Mace Windu goes one-on-one with General Grievous in a spectacular duel that requires both parties to pull out all the stops!

But Obi-Wan Kenobi cares for none of this. He is concerned with only a single target – the enemy he has pursued across the galaxy. But Obi-Wan doesn’t realize that his greatest triumph might also lead to his greatest failure, and destroy everything that makes him a Jedi and a hero.

The exciting conclusion of this story sets the stage for Episode III: Revenge of the Sith!