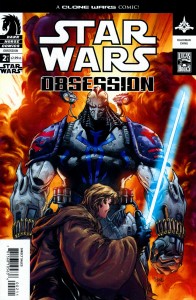 Consumed by the belief that the dark Jedi Asajj Ventress still lives, Obi-Wan Kenobi has temporarily forsaken the Clone Wars and recruited Anakin Skywalker in his desperate hunt for Ventress.

But Anakin still believes that Obi-Wan is chasing a ghost – and he should know, because he himself killed Ventress. And Anakin’s doubts are not assuaged when, following the trail of the rumors of Ventress‘ existence, they walk into a trap set by their old enemy, the bounty hunter Durge!