Mythmaking: Behind the Scenes of Attack of the Clones 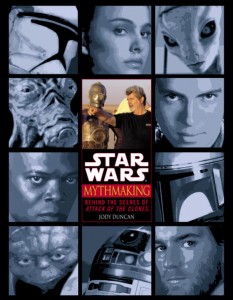 In producing all the thrilling characters, action, and romance that infuse the Star Wars epic with life, George Lucas and a host of talented actors, special-effects wizards, set designers, and visionaries of every sort have created a myth of stunning imagination. The saga has entered a new and startling phase with Attack of the Clones—and this book is the ultimate backstage pass to the making of this highly anticipated film.

Filled with revealing observations from the myth-makers themselves, and featuring hundreds of exclusive, never-before-seen color photographs from the Lucasfilm archives, this extraordinary volume begins before a single frame was shot. From scouting locations to casting decisions, the pre-production drama is brought to life. Then author, Jody Duncan, takes you through the complete filmmaking process, following the story—scene by scene—and reveals the secrets and the marvelous anecdotes that lie behind the movie magic. Inside you will find:

The only total-access look at the making of Star Wars: Episode II—Attack of the Clones—Myth Makers is a rare chance to watch creativity spring to life in George Lucas’s monumental saga of good versus evil.