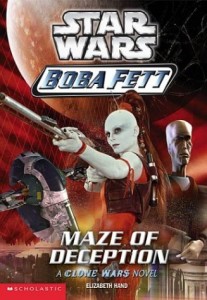 Trust no one. Especially a bounty hunter.

Aurra Sing needs Boba, and Boba needs Aurra Sing. But there’s no way they can trust each other. Every move could be a deception. Every word could be a lie.

As the search for Jango Fett’s legacy becomes dangerously complicated, young Boba Fett must outsmart and outmaneuver enemies of all kinds—even hidden ones. His future as a bounty hunter depends on it.