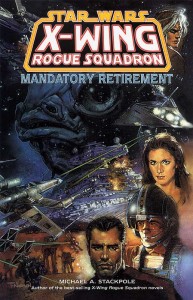 When Imperial Intelligence chief Ysanne Isard discovers that acting-Emperor Pestage has cut a secret deal with the Rebel Alliance to sell out the Empire, it appears that the Rebels‘ ticket to Imperial Center has been punched. But when Pestage is captured in his sanctuary on a far world, Rogue Squadron is assigned to go after him. If the New Republic wants to claim Imperial Center and turn the tide of war, it is imperative that they rescue Pestage, now wanted by the Empire for high treason. Unfortunately, Isard is also going after Pestage – with a brace of Star Destroyers and her own designs on the Imperial throne! Mandatory Retirement is the thrilling conclusion to the epic „Rise of Isard“ story arc and a key link in the Star Wars mythos!