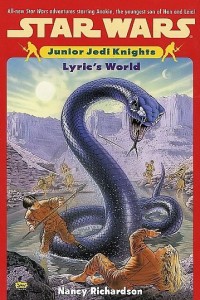 Anakin and Tahiri are off on an adventure to the distant moon of Yavin 8! There they will help their alien friend Lyric join the „elders“, the adults of her race. To do it, she must go through a strange and wonderful change. And when it is over, Lyric won’t look anything like her old self.

But Anakin and Tahiri are in for an even bigger surprise. Deep within the caves of Lyric’s world are carvings that match the ones they back in the temple on Yavin 4. If they can read them, they might be able to break the curse of the mysterious Golden Globe and defeat the dark side of the Force!

But there is something waiting for them down in the caves. Something large and dangerous. And it will take more than the Force to defeat it!