Lost Tribe of the Sith: Spiral #1 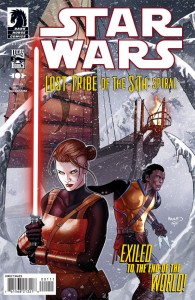 On a planet ruled by a tribe of Sith—marooned thousands of years ago and cut off from the galaxy—the throne holder is about to be challenged by a power-hungry Sith rebel from the slums . . . and a thwarted royal Sith princess! Their few shared interests set them on a quest together—but most certainly not as partners!

The saga of the lost tribe continues in comics, following the release of John Jackson Miller’s Lost Tribe of the Sith: The Collected Stories—in print from Del Rey Books!