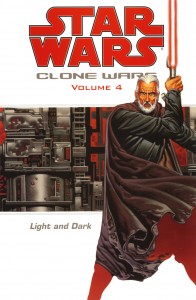 The Jedi are taught to use the Force for good; to avail themselves only to the light side. But the dark side can be a dangerous temptation to even the strongest Jedi, as Aayla Secura learns when she battles former Jedi-in-training Aurra Sing, and Quinlan Vos discovers when he crosses swords with a true master of the dark, Count Dooku. Set against the backdrop of the Clone Wars, this novel-length adventure is filled with espionage, betrayal, and amazing lightsaber battles. It all begins with a dangerous undercover assignment that leads to… well, we dare not reveal the shocking ending! A story that is sure to have Star Wars fans talking—and wondering whether the fate of the Jedi lies in the light, or the dark…