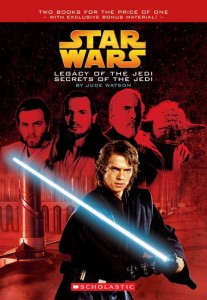 A legacy of secrets is revealed…

Loyalty and courage. Peace and justice. Master and apprentice. So the balance has been for many generations within the halls of the Jedi Temple – until now.

In Legacy of the Jedi, Lorian Nod emerges as a promising Padawan apprentice. Meanwhile, another apprentice by the name of Dooku discovers the Dark Side for the first time, ultimately threatening the lives of Qui-Gon Jinn, Obi-Wan Kenobi and Anakin Skywalker.

Jedi Master Qui-Gon Jinn returns in Secrets of the Jedi, embarking on an urgent mission to foil the mass assassination of planetary leaders. A generation later, the fate of the Clone Wars will hinge on Qui-Gon’s success.

Two books in one – with exclusive bonus material – from the New York Times bestselling author of Jedi Quest and The Last of the Jedi.