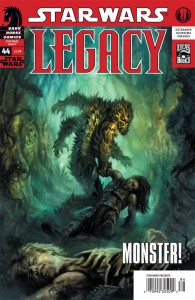 On the trail of a bounty that is supposed to bring them a cool million credits, Cade Skywalker, Deliah Blue, and Jariah Syn have taken the Mynock to Wayland — the site of Kol Skywalker and the Yuuzhan Vong’s first failure in the Ossus Project. Expecting a blue-milk run, the trio step off their ship to find something completely different . . .

Elsewhere in the galaxy, Moff Morlish Veed relishes his role as regent and Moff Nyna Calixte . . . doesn’t. And Skull Squadron prepares for a blue milk-run of their own!

The „sins“ of his father are visited on Cade Skywalker!