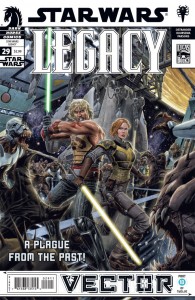 With his bounty-hunter pals and a team of Imperial Knights, Cade Skywalker plans to assassinate the Sith Emperor Darth Krayt. The first step in their scheme requires a risky attack on a remote Imperial outpost in hopes of drawing Krayt away from Coruscant.

But even if that works, members of the team are divided in their feelings about their „secret weapon“ – Celeste Morne, an ancient Jedi Knight of the Old Republic who is in possession of–and possibly possessed by–the powerful Muur Talisman.

As we plunge into the final chapters of the yearlong Vector crossover, the power of the Talisman threatens to shake the galaxy to its foundations!