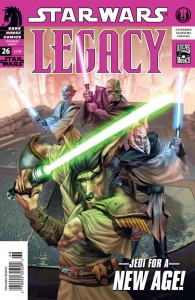 The Galaxy is in shreds from Darth Krayt’s lesson in obedience. Cade Skywalker has resolved that this Sith Emperor must be stopped, not only to free himself and his friends from being hunted-but to save the Galaxy from further punishment. And he can’t do it alone!

Cade travels to a „secret“ Jedi Temple to acquire help from additional Jedi, but his arrival may bring other dangers that do not originate with Darth Krayt . . .

This is the future of Star Wars, the continuation of the story that started in the original trilogy, and none of it has been seen before.