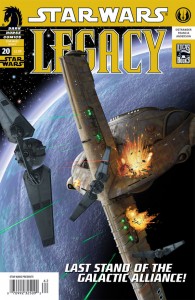 A new two-part story begins as one of the Sith’s most wily opponents risks everything to gain ground against the Empire!

For seven years, outlaw Admiral Gar Stazi has led the remains of the Galactic Alliance in hit-and-run operations against the Sith-led Empire. When word reaches him of a nearly completed, top-secret Imperial construction, he gambles his entire fleet to seize the project and turn the tide of war against the Sith!

Last Stand of the Galactic Alliance!