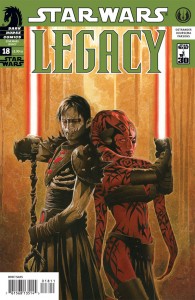 oping to free their friend Cade Skywalker from the clutches of the Sith, Deliah Blue and Jeriah Syn receive help from a surprising source. And Cade, who was captured by the Sith while trying to free Jedi Hosk Tre’Lyis, discovers that Hosk has found his own path to freedom, via the Force.

The good, evil, and those in-between are coming together, and the result is going shake the foundations of the Empire!

The full story of Darth Krayt’s origin is revealed!