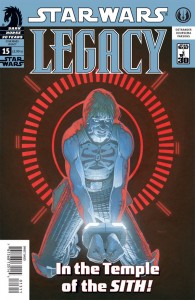 In a reckless bid to right one of his many past wrongs, Cade Skywalker has become a prisoner of the Sith. It’s a banner day for Emperor Darth Krayt, who hopes that Skywalker’s abilities will complete Krayt’s longtime quest to restore his own power.

But the other Sith are less certain of their Master’s motives. And there are others within the Empire who would rather see Cade dead than a pawn of the Emperor.

And Cade himself is none too happy about his situation. But what can he do? He turned his back on every friend who might come to his aid. He’s made bad choices, and now he has to live–or die–with them!

This issue reveals the identity of Darth Krayt!