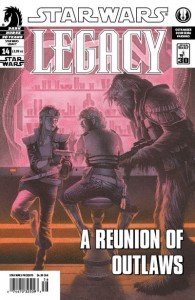 Cade Skywalker has done some bad things in his life, but possibly none worse than turning over a captive Jedi–Master Hosk–to the Sith. Now he has come to Coruscant to atone for his sins, and hopefully set Hosk free. But Hosk isn’t the only one Cade has crossed, and a chance run-in with a couple of old „friends“ may send him on a new path.

Take note! This issue begins a story that will reveal the secret behind Legacy’s most mysterious character, the self-proclaimed emperor of the Sith Empire, Darth Krayt!