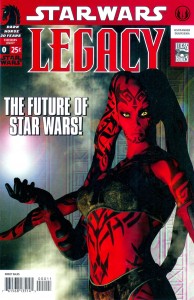 Welcome to the beginning of a grand, new chapter in the Star Wars saga!

More than a hundred years have passed since the events in Return of the Jedi and the days of the New Jedi Order. There is a new evil gripping the galaxy, shattering a resurgent Empire and seeking to destroy the last of the Jedi. Even as their power is failing, the Jedi hold to one final hope: the last remaining heir to the Skywalker legacy.

It’s a brave new galaxy for Star Wars fans, at once familiar and surprising-interplanetary intrigue and adventure on an epic scale; iconic heroes and villains cast in new roles and caught in surprising new situations. Everything you’ve loved about Star Wars, but nothing you expect!

This special 25¢ comic sets the stage for the launch of the new Star Wars: Legacy series, which begins in June!