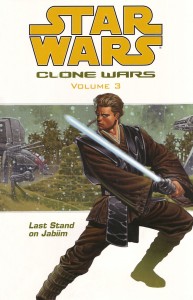 General Obi-Wan Kenobi and his Padawan Anakin Skywalker find themselves in command of a regiment of Clone Troopers on the muddy battlefields of the rain world of Jabiim. With their supply lines stretched thin and reinforcements unable to land due to the perpetual storms, the Jedi and their army have become easy targets for the rebel Alto Stratus and his elite Nimbus warriors. But the situation goes from bad to worse when General Kenobi is listed missing in action, and Anakin is teamed with a group of other Masterless young Jedi on a doomed mission to hold the last line in the Republic’s defense!

The Clone Wars heat up in this beautifully illustrated graphic novel that chronicles one of the major battles of the conflict! After twenty-six years, the most anticipated era in Star Wars history is finally being revealed, with new characters, new locations, and unbelievable action leading toward the events in Episode III.